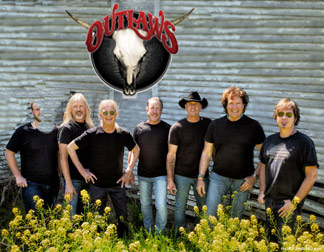 For The Outlaws, it was always about the music. For 40 years, the Southern Rock legends celebrated triumphs, endured tragedies and survived legal nightmares to remain one of the most influential and best-loved bands of the genre. Now they return with new music, new focus and an uncompromising new mission: It’s about a band of brothers bound together by history, harmony and the road. It’s about a group that respects its own legacy while refusing to be defined by its past. But most of all, it’s about pride.

"It’s About Pride" is the new album from The Outlaws, a record 4 years in the making and perhaps 20 or more in the waiting. And for original Outlaws singer/songwriter/guitarist Henry Paul, it’s a hard-fought revival whose success can be measured in old fans and new music. “Because The Outlaws have been out of the public eye for so long, it’s almost like starting over,” he explains. “But because of the band’s history, we’re seeing this as a new chapter. We’ve written and recorded this album on our own terms, and we’re out to make a significant impression. What our fans loved then they still love now, but most of all, they recognize the heart & soul of what it is we still do.” For co-founding drummer/songwriter Monte Yoho, the journey is both bittersweet and jubilant. “I still think about the friends we made when we first came into this industry, how we struggled to define this thing that became known as ‘Southern Rock’,” Yoho says. “This new album embodies all the things we shared musically and personally, as well as the relationships we have with our fans to this day. It’s about where we’ve been, where we’re going, and why we still love to do this.”

Formed in Tampa in 1972, The Outlaws – known for their triple-guitar rock attack and three-part country harmonies – became one of the first acts signed by Clive Davis (at the urging of Ronnie Van Zant) to his then-fledgling Arista Records. The band’s first three albums "The Outlaws," "Lady In Waiting" and "Hurry Sundown" – featuring such rock radio favorites as “There Goes Another Love Song”, “Green Grass & High Tides”, “Knoxville Girl” and “Freeborn Man” – would become worldwide gold and platinum landmarks of the Southern Rock era. Known as ‘The Florida Guitar Army’ by their fans, The Outlaws earned a formidable reputation as an incendiary live act touring with friends The Allman Brothers, Lynyrd Skynyrd, The Marshall Tucker Band and The Charlie Daniels Band as well as The Doobie Brothers, The Who, Eagles and The Rolling Stones.

For Henry Paul, Monte Yoho, Billy Crain, Chris Anderson, Dave Robbins and Randy Threet it’s about a band of brothers who love playing their own style of rock, and who 40 years ago first got the chance to take it from Florida to the world.