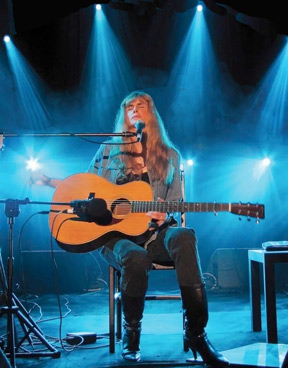 Award winner, Rory Block, has way too many other awards to name here. So let's just say she's been there, paid the dues and grabbed the gold ring. Heralded as “a living landmark” (Berkeley Express), “a national treasure” (Guitar Extra), and “one of the greatest living acoustic blues artists” (Blues Revue), Rory has committed her life and her career to preserving the Delta blues tradition and bringing it to life for 21st century audiences around the world. A traditionalist and an innovator at the same time, she wields a fiery and haunting guitar and vocal style that redefines the boundaries of acoustic blues and folk. The New York Times declared: “Her playing is perfect, her singing otherworldly as she wrestles with ghosts, shadows and legends.”

Playing guitar by age ten, her early teens were spent sitting in on the Sunday jam sessions in Washington Square Park. During these years, her life was profoundly changed by personal encounters with some of the earliest and most influential Delta blues masters of the 20th century. She made frequent visits to the Bronx, where she learned her first lessons in blues and gospel music from the Reverend Gary Davis. She swapped stories and guitar licks with seminal bluesman Son House, Robert Johnson’s mentor (“He kept asking, ‘Where did she learn to play like this?’”). She visited Skip James in the hospital after his cancer surgery. She traveled to Washington, DC, to visit with Mississippi John Hurt and absorb first-hand his technique and his creativity. Block Recalls nearly forty years later.” I now realize how lucky I was to be there, in the right place at the right time. I thought everyone knew these incredible men, these blues geniuses who wrote the book. I later realized how fleeting it was, and how even more precious.”

Today, after more than twenty highly acclaimed releases and five Blues Music Awards, Block is at the absolute height of her creative powers, bringing a world full of life lessons to bear on what she calls “a total celebration of my beloved instrument and best friend, the guitar.”

On March 27, Rory will release the second installment of her “Power Women of the Blues” album series with "Prove It on Me." The first, "A Woman’s Soul," offered her tribute to the legendary Bessie Smith, and in this second chapter Block pays homage to some of the lesser-known, but still groundbreaking, blues women. “Power Women of the Blues” continues Block’s longstanding mission to identify, celebrate and honor the early founders of the blues, including some of her all-time favorites, who were shrouded in mystery during the ’60s blues revival, while the recordings of others had simply disappeared.

"Rory Block has been an inspiration to me since we started out years ago. Her singing, playing and songwriting are some of the most soulful in traditional and modern blues." - Bonnie Raitt

"Some of the most singular and affecting country blues anyone, man or woman, black or white, old or young has cut in recent years."- Rolling Stone