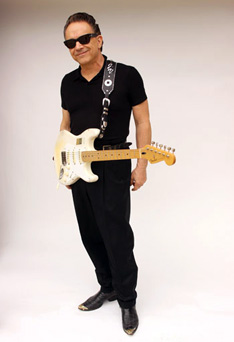 Jimmie Vaughan is far more than one of the greatest and most respected guitarists in the world of popular music. As Guitar Player Magazine notes, “He is a virtual deity – a living legend.” And when it comes to the blues today, there are a handful of guiding lights out there making sure the music stays true to its powerful source. Jimmie has dedicated his life to making sure the blues stays alive and remains an inspiration to all who listen. It's a spirit he has held close for over 50 years and he isn't about to stop now.

His new album, “Baby, Please Come Home,” is a rolling and righteous celebration of everything the blues can be. The songs can go up, down, sideways and even off in their own distinctive direction, but one thing is certain, each and every one of them is packed with pure feeling and striking originality. That's because while the blues is almost as old as America itself, every time a musician lends their soul to living inside these songs, something new comes out. There is a constant reinvention for musicians like Vaughan, because the blues demands it. There can be nothing less than a revelation, because that's how the music stays alive. It's almost like an alchemy exists, where instruments and voice join together to make a joyful noise. And above all else the blues, in the capable of hands of Vaughan and his musical cohorts, is a path to salvation. One that is birthed in the ability of songs to make life on earth a better place to be.

"Playing what you feel has always been my main goal," Vaughan says. Considering the Texas guitarist and singer has had the kind of career that makes him a living legacy, those are no idle words. After his worldwide success with theFabulous Thunderbirds during the '80s, it came time to leave that band and build his own path in exploring different approaches to the blues. He did not hesitate. And what Vaughan discovered was that he could take it anywhere; there were no boundaries. "I wanted to find out what I could really do," he says, "and when I started singing it gave me a whole new side to explore. When I was young I didn't really pay much attention to categories of music. I just heard what I liked and decided to explore that. And that's really what I'm still doing."

In 1990, Jimmie had joined up with brother Stevie Ray to record "Family Style," an album that reflected their mutually deep musical roots and modern artistic sophistication. But in August, 1990, just a few weeks prior to the album’s release, Stevie Ray Vaughan died in a helicopter crash in Wisconsin. Jimmie was devastated and retreated from touring and recording, though he continued to play guitar every day. The success of "Family Style" further enhanced Jimmie’s reputation as a distinctive musical stylist, whose rich-toned exuberance has earned him the respect of many of the greats of contemporary music. He began showing up on albums like B.B. King and Eric Clapton’s "Riding With The King," Bob Dylan’s "Under The Red Sky," Willie Nelson’s "Milk Cow Blues," Carlos Santana’s "Havana Moon" and Don Henley’s "Inside Job." Buddy Guy once said: “He’s unbeatable when it comes to the blues. He just plays it like it’s supposed to be played.” And Stevie Ray, when people would compare his playing to that of his brother, would say there was really no contest. “I play probably 80 percent of what I can play. Jimmie plays one percent of what he knows. He can play anything.”

And yet Jimmie Vaughan remains modest when it comes to his life and work. “I’m just trying to have fun like everyone else,” he concludes. “I’ve been playing since I was 13. I play every day. I’ve never stopped. I can’t imagine that I could exist without it.”