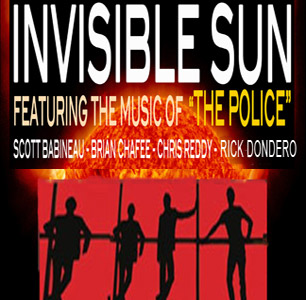 Invisible Sun started 6 years ago when Scott Babineau, Brian Chaffee, and Chris Reddy decided to play some songs by The Police at a jam session. That session turned into an annual event and with the addition of drummer Rick Dondero, Invisible Sun has become one of the premier Police cover bands around. They cover 25 songs from The Police, spanning all of their recorded work, with special attention to the detail and stylings of the originals.

Brian Chaffee is an accomplished vocalist/keyboardist from the Gardner area who has fronted "The Franks,"  "Krakow" and now regularly performs with his new band "Brian Chaffee and the Players."

Scott Babineau is a fixture in the central Ma music scene as a solo artist, front man for the very popular "Caves on Mars" and session/live work with multiple area musicians including Mark Marquis.

Chris Reddy, besides being a solo artist performing “Acoustic Loops from Hell," is currently working as the lead guitar player for the band "Doctor Robert" and was the lead singer/ lead guitarist for the Prog rock band "Transit" for 25 years. He has opened for Dave Mason, Stan Ridgeway, Jim Weider and Johnny A.

Rick Dondero, who has been playing drums for over 3 decades, has taken the reins as drummer for Invisible Sun. He also plays with Scott in “Caves on Mars” and is currently playing with several other central Ma. bands, as well. An accomplished drummer, Rick pays attention to the essence of Copeland’s ska and jazz elements.

If you enjoy the music of The Police, you must see this show!