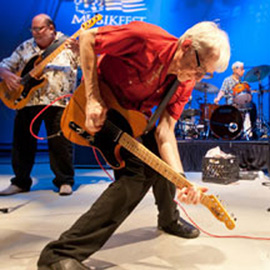 "Bill Kirchen rules, it's just that simple."
- the Austin-American Statesman

Bill Kirchen's Honky-Tonk Holiday Show features seasonal songs from Rock 'n' Roll, Blues, Rhythm and Blues, and Country; forgotten classics from the golden age of music such as Red Simpson's "Truckin' Trees For Christmas" and Hank Snow's "Reindeer Boogie", Albert King's "Santa Claus Wants Some Lovin'", some Commander Cody stuff like "Dadd'y's Drinkin' Up Our Christmas", Christmas tunes from Chuck Berry, Merle Haggard, Elvis and much more, celebrating an American musical tradition where country music draws upon its origins in blues and bluegrass, and the Western swing of Texas and California honky tonks. AND songs from Bill's original albums, which have been called "lightning in a bottle."

Bill first gained renown as lead guitarist and vocalist for Commander Cody & his Lost Planet Airmen, where the resonant twang of his battered Telecaster drove "Hot Rod Lincoln" into the Top Ten in '72. He's played guitar on recordings and performances with Nick Lowe, Doug Sahm, Elvis Costello, Emmylou Harris, Ralph Stanley, Gene Vincent, Link Wray, Danny Gatton and Hoyt Axton. A Kirchen performance recalls a half century of guitar legends and extends their brilliance into the new millenium.
He received a Grammy nomination in 2001. In 2002 he was inducted into the Washington Area Music Association Hall of Fame along with Dave Grohl (Foo Fighters, Nirvana) and John Phillip Sousa as well as winning 10 additional Wammies including Artist of the Year and Musician of the Year. In previous years, he won 2000 Rock/ Roots Rock Instrumentalist of the Year, Roots Rock Album (Raise A Ruckus) and 1999 Instrumentalist of the Year at the WAMA Awards, as well as being a multiple winner in 1997 and 1998, receiving ten awards, including Songwriter of the Year.

If you buy someone you like tickets for this show for Christmas, they'll be thanking you for years to come.

"A Titan of the Telecaster guitar" - Guitar Player magazine

"A devastating culmination of the elegant and the funky, a really sensational musician with enormous depth." - Nick Lowe

"He is one of the singular instrumental stylists of American roots music, and to hear his sound once is to have it indelibly etched on one’s musical memory." - Pop Matters

Opener:  Mark T. Small - If you've seen Mark in our Tap Room lounge, then you already know. If you haven't, you're in for a treat. Mark is an extraordinary accomplished guitarist. His concerts include instrumentals and singing & playing music from the early 1800s to the late 1950s, including Mark's signature, foot stompin blues, boogie, early rock and honky-tonk selections. He was the winner of Best Acoustic Blues Album 2014 by Blues Blast Magazine and also won the Boston Blues Challenge in 2016.